Henry Scharrer was a Swiss immigrant who settled on Caladesi Island in 1888. He was the father of Myrtle Scharrer Betz, author of Yesteryear I Lived in Paradise.

For a total of 32 years, from 1983 until 2015, a not-for-profit fund existed in Henry’s name. In 2015 HSMF was discontinued. Support is now channeled through Friends of the Island Parks, Inc., the citizens’ support group for Gulf Island State Parks.

What did the HSMF accomplish?
From 1991-2005, seven prepaid college scholarships were awarded in partnership with the Doorways Program of Pinellas County.

In 2007, Yesteryear I Lived in Paradise was republished in a third revised edition. A timeline was added along with photos and maps to illustrate the text. This edition was recognized with a Florida Preservation Award in 2009.

In March of 2008, the HSMF purchased a John Deere GATOR for use at Caladesi Island State Park.

In 2009 an archeological site survey of the Scharrer Homestead was mapped by Florida History, LLC, resulting in better understanding of the features of the Scharrer homestead. This important documentation supports continued preservation and interpretation.

In 2012, Caladesi Cookbook: Recipes From a Florida Lifetime, was published. Proceeds from sales of both the cookbook and Yesteryear, I Lived in Paradise continue to be utilized for support of the goals of the HSMF.

In 2013, a significant donation was made to FIP, Inc. toward the fundraising for the Caladesi Discovery Center. Assistance was given to D.A.R., Caladesi Chapter in placing an approved Historic Marker at Caladesi Island. The dedication took place on November 18, 2013.

In 2009-2015, HSMF provided funding to cover the printing of Trail Brochures, education courses for Rangers, Gopher Tortoise signs, trail signs, instructional manuals, mechanical parts, and supplies. Appreciation picnic events for volunteers and rangers have been underwritten by HSMF. After 32 years, the HSMF was closed. Funds generated via the sale of Yesteryear and Caladesi Cookbook will continue to be utilized for support of educational and preservation goals at Caladesi Island State Park. Project support will be channeled through the Friends of the Island Parks, Inc., the recognized Citizens Support Organization for Caladesi Island.

Goals for the future?

• To assist in the refurbishment of kiosks and displays at the Island Parks.

• To support the effort by Friends of the Island Parks, Inc. to build the Caladesi Discovery Center, with a 25 ft. lookout porch, shaded areas for programs, interpretive displays. The structure will be built on the site of the old fire tower.

• To assist with archiving and preservation of Gulf Island Parks historical documents. 1st phase accomplished in 2011 (digital scanning of over 2000 photos and documents), 2nd phase (organization of all images and documents) accomplished by Park Volunteer in 2013. 3rd phase (to interpret, caption and capture primary comments from those who experienced the events) is in progress in 2015-2016.

• To explore the feasibility of building a scale replica facsimile of the Scharrer homestead as a display for visitors.

• To work whenever possible in partnership with Friends of the Island Parks, Inc. on projects undertaken by that Citizens Support Group.

History of the HSMF
Yesteryear I Lived In Paradise was first published in 1985 in a loose-leaf binding made possible by the interest and generosity of 105 friends of Myrtle Betz. This edition was presented to Myrtle as a surprise gift for her 90th birthday.

A 1991 edition, published by Palm Harbor Chronicle Publishing Project, was sponsored by the Palm Harbor Junior Women’s Club under the leadership of Susan Latvala. The 1991 revised edition was edited by Sharon Kirby, Terrance M. and Marjorie E. Fox, of Direct Response Marketing. The proceeds for the 1991 edition, above the cost of publication, went to the Henry Scharrer Memorial Scholarship Fund. It had been Myrtle’s expressed wish to help one young person to experience a college education via a scholarship given in memory of her father. In fact, as the 5,000 second edition books sold, seven prepaid college scholarships were awarded in partnership with the Doorways Program of Pinellas County. 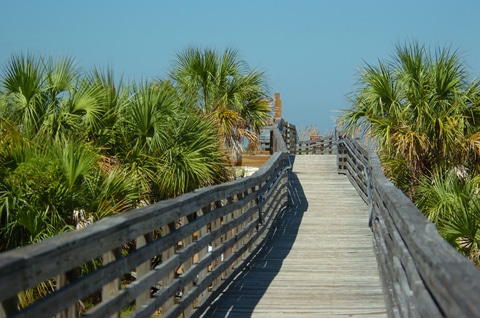 As copies of the previous editions became scarce, many requests to reprint a revised edition were made, and Myrtle’s granddaughters, Terry Fortner and Suzanne Thorp, moved ahead with a republishing project in partnership with the University of Tampa Press and with assistance from many wonderful people.

In the footsteps and in the tradition of Henry Scharrer, the staff and volunteers of the State Park Service of Florida continue to serve the public as they protect what can be saved of the habitat and history of these barrier islands. In honor of the dedicated men and women who serve as Managers, Rangers, Staff and Volunteers of Caladesi State Park, of the past and present, a portion of the proceeds of this edition will continue to be dedicated to underwrite specific projects at Gulf Island State Parks, especially Caladesi Island.