Excerpt: Gifts of the Sea

from Yesteryear I Lived in Paradise by Myrtle Scharrer Betz

GIFTS FROM THE SEA

But it was not all work; it seemed every week there was something of interest to do or see. If there had been a winter blow, the beach would be newly covered with colorful shells of all kinds. Sometimes there was a real treasure to be found. Every so often there was a rare junonia, for which, if in good shape, a shell dealer would pay ten dollars. Once, in a little pearl oyster, there was a perfect pearl, small but lovely.

Sometimes timber washed in – things that could be used for dock repairs and other uses. Then there were things of no value, but they held a story.

What happened to bring in the broken oar from a ship’s long-boat, the name of the ship on the blade?Combing the beach to me was like turning the pages of a book. Everything held a story. The beach also was a source of food. During the month of February, a sea mustard grew above the tide mark. It was unmatched by any of the garden greens. In the summer months a little surf clam called coquina was plentiful.This made a broth much like oysters but far more delicate and delicious. So the beach had much to offer.

The wooded part of the island also had much to offer. There was always something new. Under an oak thicket were fresh cast skulls, bones and fur. So a barn owl had joined the other residents of the woods. Something new in plant life may have appeared; from where and how was always a question. In among some scrub a sand pine reared its head, something that had not been there before. On a ridge a turkey oak showed its cut leaves, a new flower bloomed; always a surprise seemed to appear.

Sometimes it was a first, as when the burrowing owls came to the beach, using the ghost crab holes which the owls enlarged into their burrow. Such friendly little birds, always the pair together. In their burrows were their three or four young. The nesting material would lead one to believe that they were making a hot bed for their young: dried dung, cigarette packages, pieces of rags and on this nesting material was placed food for the little owlets. Most times it was a rat with the head eaten off. These friendly little birds, shortly after coming to the beach, met a most unjustified end. Deep-sea fishermen dragging the beach for bait saw the owls and either shot or killed them by striking them with a stick, killing them for fish bait. This was a hard blow to one who had studied them and enjoyed these very valuable birds. But there were many heartaches of this type to be endured over the years.

To the child that I was, there were new things, pleasure in every month of the year, always something to look forward to. There were the sea-foods that came seasonally, such as the stone crabs that moved on the grass flats as soon as the first cool spell of fall came. These large crabs dug a burrow and were gathered by the use of a hook on a short pole. When the hook was put in the crabs’ burrow, they would snatch the hook in their claws and allow themselves to be drawn out. We had an oyster bar, tended to keep the whelks off of it, as they, too, like oysters. Since we always returned the opened shells to the bar for the spat (an oyster spawn) to attach themselves to, this small tended bar kept us in oysters all during the cool months.

In July, scallops were to be had in abundance. Earlier they were too small to gather. These lasted into late August. Always there were clams to be found on most of the grass flats. At low tide it was only a matter of walking over the flats and looking for what was called the keyhole. This was the mouth of the clam at ground level. Fish of some kind could be caught any day in the year. 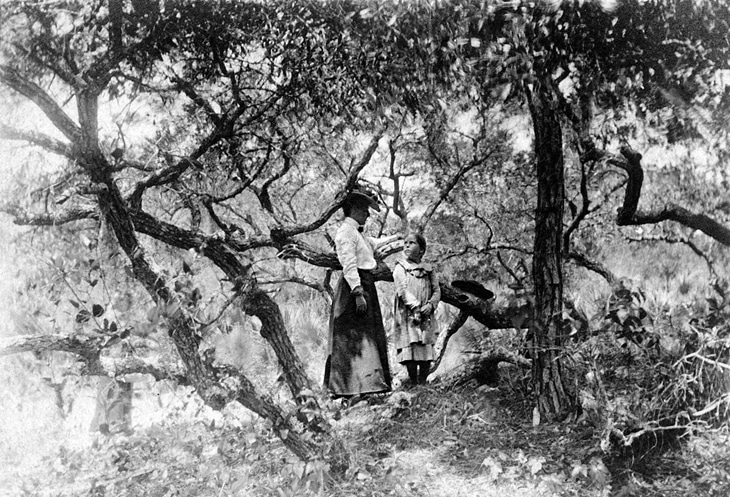 The fall months brought the fat mullet, later to have the delicious roe. Food for the table was always there, only needing to be gathered and prepared. As I used these foods, I thought of primitive man who had lived here, and I felt I was following his footsteps. I often wondered if small Indian children had not done just as I was doing in the same way and over the same ground.

The high land also held a food supply. The cabbage or sabal palms had a heart, the bud that could be cooked as a vegetable or used as a salad. Then there were sea grapes and fox grapes to make jelly and jam.