Descendants of Caladesi Island’s pioneer settlers have published two award-winning books: Yesteryear I Lived In Paradise, a captivating memoir of pioneer island life by Myrtle Scharrer Betz, and the Caladesi Cookbook: Recipes from a Florida Lifetime.

Yesteryear I Lived in Paradise

One of the few remaining natural islands along Florida’s Gulf Coast, Caladesi Island has been rated first among America’s best beaches. Now you can explore captivating Caladesi through the eyes of a born storyteller, the only child ever born on Caladesi Island, Myrtle Scharrer Betz.

Myrtle’s account of growing up on Caladesi Island is one of the richest portraits available of life in Florida when it really was a natural tropical paradise. Myrtle’s tale, Yesteryear I Lived in Paradise, vividly captures the natural wonders, discomforts, challenges, and joys of pioneer life on a barrier island in the late 19th and early 20th centuries. With wisdom, insight, and poetry, Myrtle Scharrer Betz crafts a story that is a national treasure.

Yesteryear I Lived In Paradise was first published in 1985 in a loose-leaf binding made possible by the interest and generosity of 105 friends of Myrtle Betz. A portion of the proceeds of the current edition of Yesteryear, published in partnership with the University of Tampa Press, are dedicated to Caladesi Island State Park.

A favorite of judges and readers alike, Yesteryear received the Florida Trust for Historic Preservation Statewide Preservation Award in 2009.

Please note: Hardcover and softcover copies of Yesteryear I Lived in Paradise are sold out.

A new edition with additional content from Myrtle Scharrer Betz’s original writings will be published in 2022-23. If you want to be notified when the new edition is available, please join our waiting list. We will be in touch when we have more information. 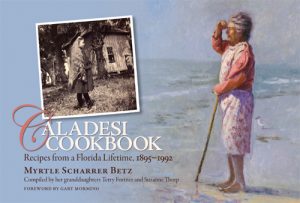 An appetite for regional cooking and a taste for local history will both find satisfaction in an appealing new cookbook from the University of Tampa Press. From main courses like “Smoked Fish Pioneer Style” and “Hog Island BBQ Ribs” to sweet treats such as “Sea Foam,” and “Belleview Hotel Prune Whip,” the Caladesi Cookbook offers tempting recipes for seafood, salads, vegetables, breads, and desserts.

Myrtle Scharrer Betz, born and raised on Caladesi Island at the turn of the last century, was a resourceful and accomplished cook who took pleasure in serving delicious meals and passing along her favorite recipes. Now her granddaughters, Terry Fortner and Suzanne Thorp, have compiled the best of them and added generous helpings of vintage photos and excerpts from Myrtle’s letters and writings, along with a dash of their own special memories.

The result is a flavorful complement to Myrtle’s memoir, Yesteryear I Lived in Paradise, published by the University of Tampa Press and 2009 winner of a Florida Trust for Historic Preservation Award. The cookbook has been printed with soy-based inks on recycled text paper, and a portion of proceeds from its sales will directly support Caladesi Island State Park.

Historian Gary Mormino, Duckwall Professor of Florida History at the University of South Florida, St. Petersburg, writes: “Caladesi Cookbook: Recipes from a Florida Lifetime is pure delight. More than simply a good cookbook, it is a touching story of a lost and vanishing Florida… Myrtle’s granddaughters, Terry Fortner and Suzanne Thorp, have lovingly compiled not simply the recipes, but the memories and stories that make Caladesi Cookbook: Recipes from a Florida Lifetime a culinary and historic treasure.”

The Caladesi Cookbook is available at Honeymoon Island Nature Center, Café Honeymoon, and Café Caladesi at the State Parks. On the mainland it can be found at the Dunedin Historical Museum, Dunedin Fine Art Center, Dunedin’s Painted Fish Gallery, Tarpon Springs Area Historical Society, Heritage Village in Largo, Gulf Beaches Historical Museum in Gulfport, North Pinellas Historical Museum in Palm Harbor, and other locations. It can also be ordered directly from Terry Fortner.