The Story Behind Yesteryear 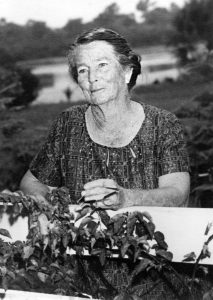 Myrtle Scharrer Betz, the only child ever born on Caladesi Island, looked at her precious newborn great-granddaughter, Jenny, and realized that she wanted her to know, someday, how life had been, once upon a time, on that spectacularly beautiful Gulf Coast island.

And so Myrtle, who at age nine had rowed herself across St. Joseph Sound to school, sat down to write about her life on Caladesi Island. She was 87.

Myrtle wrote longhand in a binder, journal and spiral notebook. Her work assured that many besides Jenny would get to know about the idyllic life of a girl who grew up on an island paradise that her father tamed without tarnishing.

Yesteryear I Lived In Paradise was first published in 1985 in a loose-leaf binding made possible by the interest and generosity of 105 friends of Myrtle Betz. This edition was presented to Myrtle as a surprise gift for her 90th birthday.

A 1991 edition, published by Palm Harbor Chronicle Publishing Project, was sponsored by the Palm Harbor Junior Women’s Club under the leadership of Susan Latvala. The 1991 revised edition was edited by Sharon Kirby, Terrance M. and Marjorie E. Fox, of Direct Response Marketing. The proceeds for the 1991 edition, above the cost of publication, went to the Henry Scharrer Memorial Scholarship Fund. It had been Myrtle’s expressed wish to help one young person to experience a college education via a scholarship given in memory of her father. In fact, as the 5,000 second edition books sold, seven prepaid college scholarships were awarded in partnership with the Doorways Program of Pinellas County, Florida.

As copies of the previous editions became scarce, many requests to reprint a revised edition were made, and Myrtle’s granddaughters, Terry Fortner and Suzanne Thorp, moved ahead with a republishing project in partnership with the University of Tampa Press and with assistance from many wonderful people.

In the footsteps and in the tradition of Henry Scharrer, the staff and volunteers of the State Park Service of Florida continue to serve the public as they protect what can be saved of the habitat and history of these barrier islands. In honor of the dedicated men and women who serve as Managers, Rangers, Staff and Volunteers of Caladesi State Park, of the past and present, a portion of the proceeds of current editions of Yesteryear are dedicated to underwriting specific projects at Gulf Island State Parks, especially Caladesi Island.

Note: Hardcover and softcover copies of Yesteryear I Lived in Paradise are again sold out.

A new edition with additional content from Myrtle Scharrer Betz’s original writings will be published in 2022-23. If you want to be notified when the new edition is available, please join our waiting list. We will be in touch when we have more information.